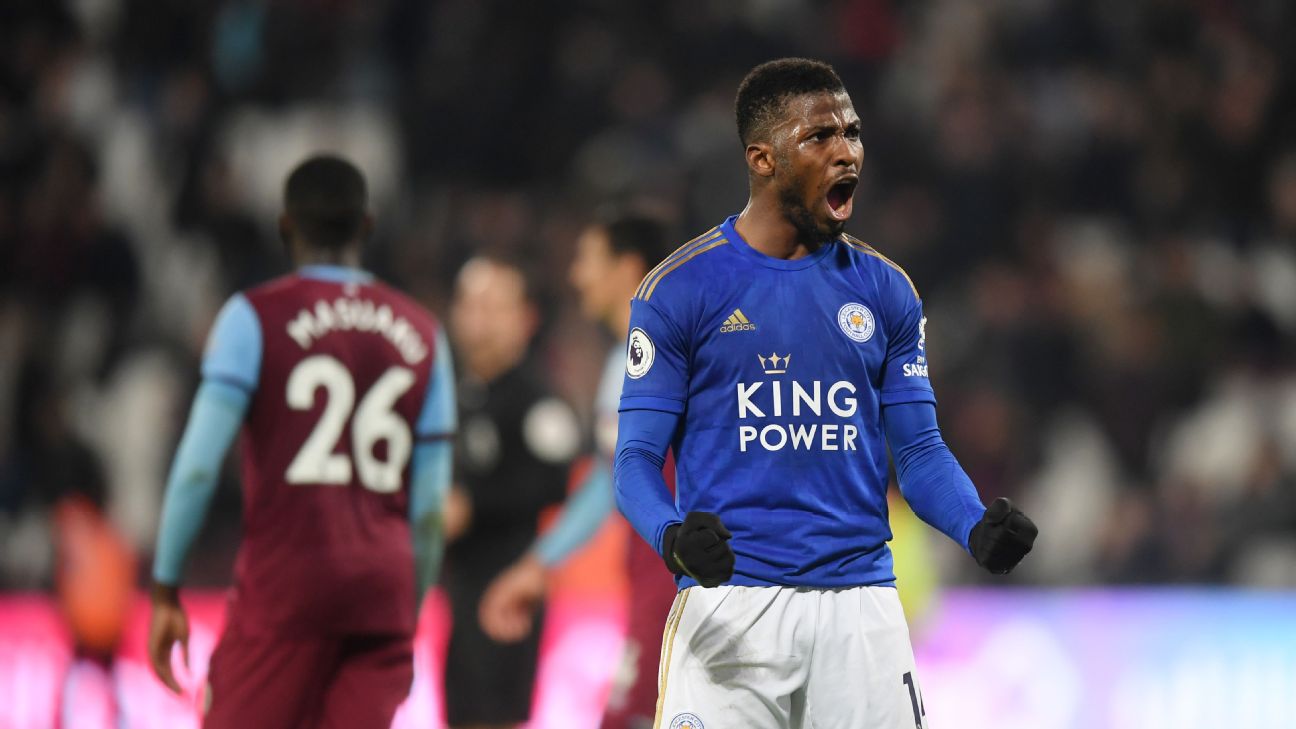 Not so long ago there was the widespread feeling that Kelechi Iheanacho‘s career was on the highway to nowhere.

At 22, heading into his 23rd year, and despite a good preseason showing, he was unable to get into Leicester City’s match-day squad, let alone get on the field as the new English Premier League campaign commenced, then progressed.

Not until December did he make his first Premier League appearance, a full four months after the start of the season.

Prior to that, he had made five appearances on the bench without seeing any league action. He did get to see game time in Carabao Cup games, however, and showed that, despite the lack of playing minutes in the league, he was keeping himself in good shape, scoring three goals in six appearances.

On the first day of December, as Leicester started their hectic fixture grind through the festive season, Iheanacho got his first crack at Premier League action.

Leicester were looking laboured against Everton, who had taken an early lead through Richarlison.

The Foxes were looking shorn of ideas, and uncharacteristically blunt. Brendan Rodgers decided to switch things up. For his game changer, he sent on Iheanacho who, until then, had seen no league action.

This was as double-edged a sword as any. One that would either make or break the forward. Do well, and he would earn more opportunities. Perform poorly, and his prospects would be bleaker than ever.

But the Nigerian changed the game for Leicester, with an assist to help them equalise and then scoring a late goal to secure a fine win and claim man-of-the-match honours.

For a player who was making his first league appearance of the season, that was both unexpected and remarkable; but not for his manager. Rodgers pointed out how Iheanacho had been able to make such an impact.

“He’s such a good boy who gives his all, but doesn’t play so much,” Rodgers said.

“He was absolutely outstanding. He gave us strength, he gave us power, good running in behind, and then he creates and scores a goal.

“If you look at his numbers this season, in the cup games, any time he has come in, he’ll affect the game. So it was great recognition for all his hard work.”

Hard work: That is a very important phrase in Iheanacho’s career dictionary.

When he was cut from Nigeria’s Africa Cup of Nations squad in 2019, Super Eagles coach Gernot Rohr said that Iheanacho needed to work harder. Rodgers jumped to his defence, defending the forward’s work ethic.

If there were any doubt about the amount of work Iheanacho had put in, his performance for Leicester when he got his opportunity, more than proved it.

By the end of December, he had three goals and two assists in the league. Added to his Carabao Cup total, that is six goals from nine appearances.

A source close to the player told ESPN that Iheanacho was always confident that he would take his chance when it arrived.

– Analysis: Who are the most underrated players in the EPL?
– Africans Abroad: Aubameyang walks in Arteta footsteps

“Kele knows his own talent, but he also understands that there are many reasons why he was not playing. So he just kept working hard every day in training, and keeping himself ready, so that he could show his talent when he got the opportunity.”

Rodgers helped, by talking to the player regularly.

“Everyone wants to start but if they’re not, it’s important,| the manager said. “I spend a lot of time talking to him, and Marc Albrighton and Wes Morgan and these guys, because I recognise what they give, but it’s not always seen by many.

“I’m so pleased for Kels because he’s got talent. He doesn’t have an easy role at the club but he’s proven his qualities in a big game, and that’s absolutely crucial.”

Rodgers, again, harped on those qualities after Iheanacho scored his most recent goal, the Foxes’ equaliser in the first leg of their Carabao Cup semifinal against Aston Villa.

Those qualities are what another player, Iheanacho’s international teammate, will need as he attempts to reboot his career.

Henry Onyekuru‘s path has taken a similar downward slide to that of Iheanacho.

A stunning breakout season in Belgium earned him a big transfer to Everton, but work permit issues saw him loaned out and then he suffered an ACL injury that kept him out for over a year.

He bounced back to join Galatasaray in Turkey, where he scored 14 goals in 31 games as Gala won the Turkish Super Lig and Turkish Cup double in 2019.

Those numbers helped him to secure a big move to Monaco, where his career was expected to blossom further.

Instead, he made just four appearances all season, recording but one assist. Like Iheanacho, that lack of form cost him his international place, one on which his grip was tenuous at best.

This January, Onyekuru has retraced his steps back to Galataaray, with whom he will attempt to work his way back up.

Work being the operative word.

Just like Iheanacho, Onyekuru will have to prove himself all over again.

Gala, of course, is like a second home to him, which should make the task just that little bit easier.

But he will need to put that, and the events of the past few months, behind him, and put in as much grind as Iheanacho has done at Leicester.

The talent is not in the doubt. Now he has to show that he has the industry to go with it.

Iheanacho’s bounce-back should prove motivation enough for Onyekuru to make his way back up.