Achraf Hakimi is on the verge of joining Inter Milan from Real Madrid, multiple sources have confirmed to ESPN, after emerging as one of the most exciting young talents in European football during a two-year loan at Borussia Dortmund.

The transfer, which both clubs expect to announce shortly, is worth around €40 million plus add-ons and will see the full-back sign a five-year contract.

Stream Serie A games on ESPN+

Hakimi, 21, had two years left on his deal at the Bernabeu. Sources close to the player told ESPN he was unwilling to return to Madrid this summer to be a squad player at this stage of his career and has been promised a starting spot at San Siro. 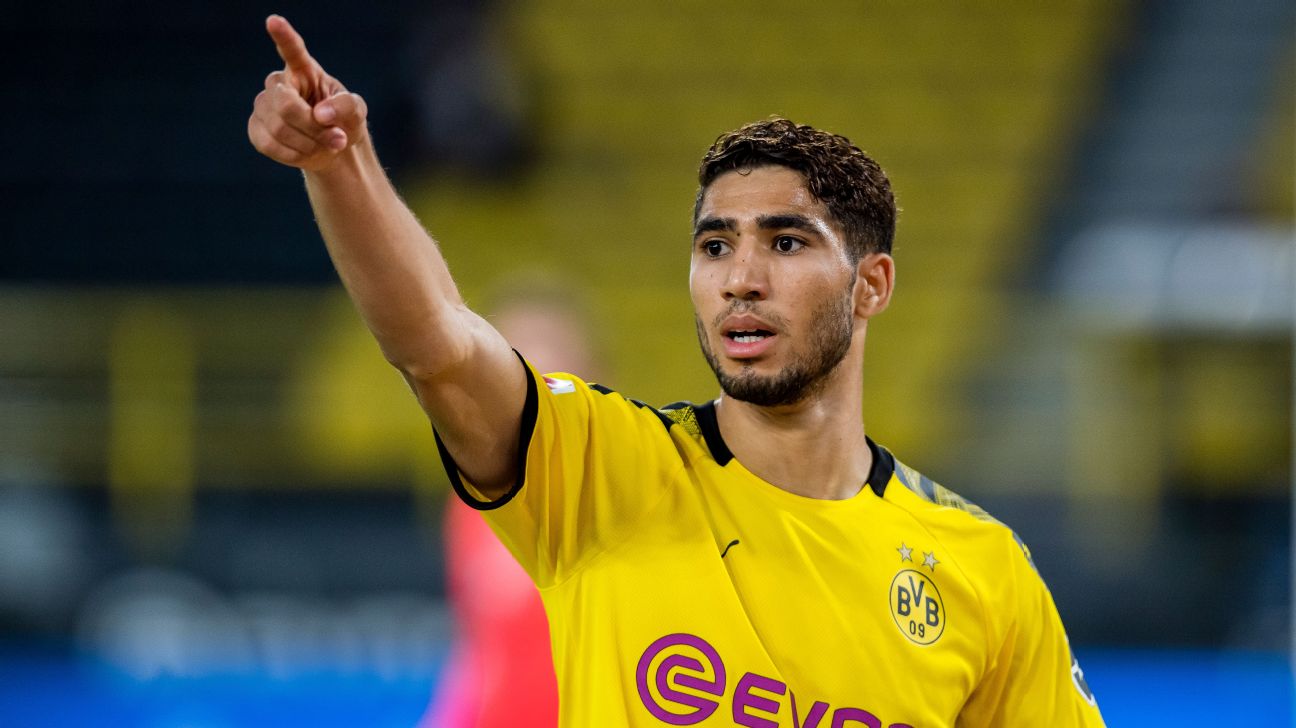 The player and his representatives accept that Dani Carvajal will remain coach Zinedine Zidane’s first-choice right-back in the short and medium term, given his quality and status in the dressing room.

At Real Madrid — both at senior level and among Zidane’s coaching staff — there is admiration for what Hakimi has done at Dortmund, but doubts remain about how he would perform in a different tactical set-up.

In the Bundesliga he has often featured as a wing-back ahead of a back three, a system Zidane rarely uses, with one club source having called into questioning his defensive work rate compared to Carvajal. At Inter, Hakimi could continue to thrive as a wing back given coach Antonio Conte’s preference for a 3-5-2 formation.

The fine print on the deal is still being worked on, including the possibility of Real Madrid having the right to match any offer that Inter receive for Hakimi, and the club are not ruling out a future return for the Morocco international.

Hakimi made his La Liga debut in October 2017 during Zidane’s first spell in charge of Madrid, having impressed for the club at youth level. He made good progress that season — making nine league appearances and scoring twice, as well as featuring in the Champions League — before joining Dortmund in July 2018.

Since then he has made 54 Bundesliga appearances for the German side, scoring seven goals. Hakimi is most comfortable as an attacking right back but can also play on the left, as well as in more advanced positions.

He had been courted by a number of big clubs in recent months, including Dortmund themselves, Bayern Munich and two Premier League sides. Inter are third in Serie A behind Juventus and Lazio, comfortably in the Champions League places.

Real Madrid‘s Karim Benzema produced an audacious back-heeled assist for Casemiro to score as they beat Espanyol 1-0 away on Sunday to capitalise on Barcelona‘s slip-up a day earlier and move two points clear at the top of La Liga.

Brazilian midfielder Casemiro slid to the ground to guide the ball home on the stroke of halftime after being played in by a stroke of genius from Benzema, who dragged the ball through the legs of the defender marking him to find his team mate.

Real saw out their slender lead for a fifth consecutive victory which gave them a two-point cushion in the title race over Barca, who were held to a 2-2 draw at Celta Vigo on Saturday.

Espanyol, who were playing their first game under caretaker coach Francisco Rufete after he became their fourth manager of a troubling campaign, remain rooted to the bottom of the table on 24 points, 10 away from escaping the relegation zone.

Real Madrid are two points clear at the top of La Liga after grinding out a victory at bottom club Espanyol.

Casemiro scored the only goal as he latched onto Karim Benzema’s brilliant no-look backheel through the legs of defender Bernardo Espinosa before firing home.

The Brazilian had earlier gone close to the opener when his shot from his own half was saved by Diego Lopez.

Sporting director Francisco Rufete took over as manager on Saturday after replacing Abelardo Fernandez – the third Espanyol boss to be sacked this season.

They put up a good fight, with Wu Lei among the players to go close, but fell just short.

Real Madrid are now only six wins – or five wins and a draw – from a second La Liga title since 2012.

City rivals Atletico can do them a favour when they visit Barca on Thursday.

Zinedine Zidane has admitted the Real Madrid job “wears you out,” saying he has no desire to coach for another 20 years.

Madrid and Barcelona are locked in a frantic La Liga title race, level on points — with Zidane’s team top thanks to their head-to-head record — with seven games left to play over just three weeks.

“I won’t coach for 20 years. I’ll retire before that,” Zidane said in a news conference ahead of Real Madrid’s game with Espanyol on Sunday. “I’m an unusual coach, anything could happen. I’m not planning anything. It’s the day-to-day that excites me. For how long, I don’t know.

“In my head I’ve always been a player. I played for 18 or 19 years, and after that when people asked me if I’d be a coach, I said no. Then I decided to become one. This really wears you out. It won’t be 20 years, that’s for sure.”

Madrid have been in good form this month, winning four out of four matches since La Liga’s return, while rivals Barca have already dropped points in a 0-0 draw with Sevilla.

Part of that success has been an impressive defensive record, with just 21 goals conceded in La Liga this season, the fewest of any team.

“[Ramos and Varane] are the best pair around,” Zidane said. “What they do is exceptional. I like to play football, but defence is the most important thing today. We have an advantage with the defence we have, and we have players who are committed. But defending isn’t about four or five players. We’ve shown strength and attitude as a team.”

Ramos has also contributed in attack, scoring eight league goals this season — his best-ever tally — including a free kick in Madrid’s 2-0 win over Mallorca on Wednesday.

Ramos and Zidane played together in the 2005-06 season, which was Zidane’s last as a player and Ramos’ first at the club.

“He had quality and above all personality,” Zidane said. “He wanted to win, he wanted to make history at this club. I’m not surprised at all by what Sergio has done. We’re lucky to have a player like that. I hope he stays with us to the end.”

Sunday’s opponents Espanyol are bottom of the La Liga table, eight points from safety. They sacked manager Abelardo on Saturday, with sporting director Rufete now in temporary charge — their fourth coach in a disastrous season.